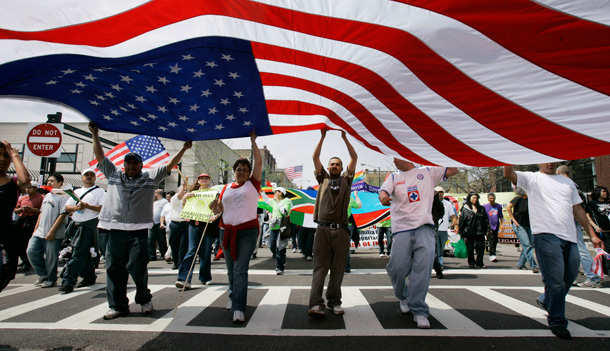 How do immigrants strengthen the U.S. economy? Below is our top 10 list for ways immigrants help to grow the American economy.

. Immigrants are also more likely to create their own jobs. According the U.S. Department of Labor, 7.5 percent of the foreign born are self-employed compared to 6.6 percent among the native-born.

. Immigrants are our engineers, scientists, and innovators. According to the Census Bureau, despite making up only 16 percent of the resident population holding a bachelor’s degree or higher, immigrants represent 33 percent of engineers, 27 percent of mathematicians, statisticians, and computer scientist, and 24 percent of physical scientists. Additionally, according to the Partnership for a New American Economy, in 2011, foreign-born inventors were credited with contributing to more than 75 percent of patents issued to the top 10 patent-producing universities.

. Immigration boosts earnings for American workers. Increased immigration to the United States has increased the earnings of Americans with more than a high school degree. Between 1990 and 2004, increased immigration was correlated with increasing earnings of Americans by 0.7 percent and is expected to contribute to an increase of 1.8 percent over the long-term, according to a study by the University of California at Davis.

. Immigrants boost demand for local consumer goods. The Immigration Policy Center estimates that the purchasing power of Latinos and Asians, many of whom are immigrants, alone will reach $1.5 trillion and $775 billion, respectively, by 2015.

. Immigration reform legislation like the DREAM Act reduces the deficit. According to the nonpartisan Congressional Budget Office, under the 2010 House-passed version of the DREAM Act, the federal deficit would be reduced by $2.2 billion over ten years because of increased tax revenues.

As a nation of immigrants, we must remember that generations of immigrants have helped lay the railroads and build our cities, pioneer new industries and fuel our Information Age, from Google to the iPhone. As President Obama said at a naturalization ceremony held at the White House last week:

The lesson of these 236 years is clear – immigration makes America stronger. Immigration makes us more prosperous. And immigration positions America to lead in the 21st century. And these young men and women are testaments to that. No other nation in the world welcomes so many new arrivals. No other nation constantly renews itself, refreshes itself with the hopes, and the drive, and the optimism, and the dynamism of each new generation of immigrants. You are all one of the reasons that America is exceptional. You’re one of the reasons why, even after two centuries, America is always young, always looking to the future, always confident that our greatest days are still to come.

We celebrate the contributions of all Americans to building our nation and its economy, including the generations of immigrants.