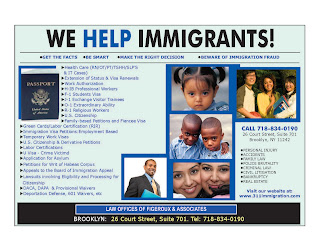 WASHINGTON, DC – The American Immigration Lawyers Association (AILA) and the American Immigration Council (Council) have petitioned the Department of Homeland Security and the Department of State to issue new regulations that will ensure all immigrants have access to legal counsel in secondary and deferred inspection, as well as overseas consular interviews. If the agency fails to respond or denies the petition, AILA and the Council may pursue litigation in federal court.
Benjamin Johnson, AILA Executive Director, explained:


“Due process is never optional but this is especially true in today’s tumultuous atmosphere. Everyone needs access to legal counsel in immigration proceedings, from start to finish – when applying for visas at a U.S. Embassy or Consulate, when seeking recognition or relinquishment of U.S. citizenship or nationality status, and when seeking admission to the United States. Earlier this year, many immigrants were detained for hours by U.S. Customs and Border Protection (CBP) officers at airports around the country and denied access to counsel even as officers were asking them detailed, complicated questions about their immigration status. Immigration law is incredibly complex and denying someone access to counsel is contrary to basic American principles of due process.”


“Access to counsel in government proceedings is fundamental to ensuring that our laws are properly executed and that due process is afforded those navigating the immigration system. Barring lawyers from participating—particularly when a complicated legal issue arises—can result in both citizens and noncitizens being subjected to prolonged and unnecessary detention and questioning at a port of entry. Moreover, the lack of meaningful access to counsel can result in an unjust refusal of a visa, denial of admission, or removal from the U.S.  The presence of counsel allows proceedings to move more efficiently and effectively, a benefit for the government in a time of backlogs and delays in the immigration arena.”

Posted by Figeroux & Associates at 3:06 PM