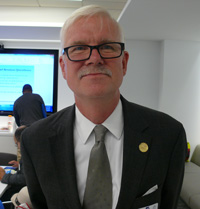 Question: Can you share with us your thoughts on the prevailing issue of gun violence that is creating havoc in our communities?

Anthony Butler: I think the easy access to guns and not applying the rules and regulations that currently exists regarding the restrictions of guns is one of the primary problem to gun violence. Guns are accessible across state lines, accessible without background checks at the varying number of gun trade shows and this is a major problem. I think there is a moral problem too. We’ve become a country where we think the other person is an adversary so we have this need to defend ourselves, not by negotiating with the other person, but rather settle our differences and disputes by a high level of violence, what use to be settled by an argument is now settled by fatal violence.

Question: what can be done to at least curb the problem or bring about a complete elimination of illegal guns in our streets?

Anthony Butler: There needs to be stricter regulations of guns by way of greater licensing on how guns are obtained. We regulate automobile through licensing and all kinds of checks as to who can own vehicles, but when it comes to weapons we do not do that. Young people and all of us need to understand that violence is not the first response to things and that your respect of yourself does not come from other people, your respect must come from yourself and you must know that you are inherently valuable and no one can take that away from you, and so you don’t need to permanently disable the other person by killing them in order to create your own sense of self-worth. We live in a century of cultural violence which continues with gun violence, with abortion issues, it continues with poverty issues and things that a great deal of our communities do not see as worthwhile…we don’t value individual lives. Until we change that notion that people are inherently valuable, I don’t think anything will change.

Posted by Figeroux & Associates at 3:16 PM