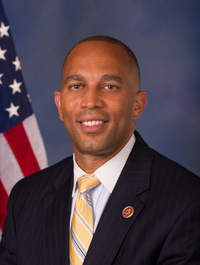 Question: There seems to be a continuous rise of gun violence across New York City, as an influential young man in this City and a US Congressman, what is your take on this epidemic and your suggestion to curb the deadly problem?

Congressman Hakeem Jeffries: We have a gun violence epidemic in the City of New York and across of America as most recently brought to life again by the tragic shooting in Oregon. America has five percent of the world’s population, but fifty percent of the world’s guns, so half the guns that exists  in this world is in the United States of America. It is estimated that we have more than 285 million guns in circulation throughout this country. That’s why it is important for Congress to act and to make sure: 1.That we can do everything possible to keep guns out of the hands of criminals, those with criminal convictions as well as those with mental illness who are likely to do us harm. In the inner City we’ve got additional challenges here in Brownsville and throughout East New York and throughout communities in Brooklyn and New York City, because the guns that cause the havoc here aren’t being sold originally or manufactured in the City of New York, they are actually imported into the City from Southern States like North Carolina, South Carolina, Virginia, Georgia, as well as the neighboring state of Pennsylvania.

One of the things that Congress woman Yvette Clarke and I have worked on is to try to secure funding for the bureau of Alcohol, Tobacco and Firearm known as the ATF that is the Federal Agency charged with enforcing our gun laws, and it has the responsibility to prevent guns from being traffic from other States into New York. We recently wrote to President Obama requesting an additional 60 million dollars for funding in the context of this year’s budget for the ATF, so we can fully fund the gun prevention effort. Lastly we’ve got to make sure that our young people have other opportunities for their natural intelligence and abilities to be brought to light so that those bad actors who would tempt them with destructive behavior aren’t pull them into a different way of life.

Question: What role can the Church play in helping to alleviate the problem?
Congressman Jeffries: One of the reason why it is so important for the church to be engaged as intimately as possible, is so that we can develop a culture of life as it relates to respecting one another and the godliness that has been put into all of us who has been created in God’s image. One of the problems that we have seen in the absence of respect for life, disputes that should have been worked out in different ways and perhaps in the past would have resulted in physical altercation and not the taking of one’s life are handle in ways that we see levels of violence that should concern us all. It should be noted of course, having grown up myself here in Central Brooklyn in Crown Heights and Bedford Styvason in the 1980 that gun violence and homicides have decline dramatically over the last 20 or 25 years. They are still too high, because it use to be some 2000 a year and now they are down to under 350 per year, that is still 350 too many and there is still lots of work to be done, but we need to look at how that progress was made with investment from community leaders, clergy and others and continue that so we can get it down to a point where not a single life is taken in our communities.

Question: Is there a particular message you want to send to those touting guns for the purpose of settling disputes?

Congressman Jeffries: Young people need to take a deep breath, pause and think before you act, because the consequences of a bad decision on one day could last not just for a week, a month or a year, but, can impact you for the rest of your life. So it is important to pause, to think and to seek out an elder, and to respond to conflict not with aggression, but in a calm and reasonable fashion that will allow that young person to live out their life and reach their full potential.
Posted by Figeroux & Associates at 2:58 PM