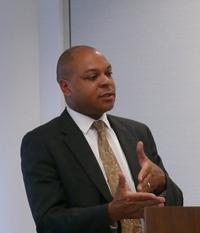 Question: Governor Andrew Cuomo’s Aide was accidentally Show by a stray bullet and subsequently died of his injuries, gun violence has been and is now posing an even greater threat to the lives of innocent people across the City and State of New York, as a religious leader and an officer of the State of New York, what is your response to the issue of Gun violence and its impact on residents of this state?

Rev Karim Camara: The issue of gun violence is a long standing problem. We have to deal with the issues of the concentration of poverty in communities throughout the country. This is something that is not unique to New York City or New York State. In this State we have to continue programs such as the ones Governor Cuomo has championed and passed through the legislative process, and the ones he has come up with on his own including urban youth jobs, work for success and increase the minimum wage. We can’t blame gun violence alone on someone not having a job, but we have to look at all the factors that lead into community decay and many of those situations has to do with economics not guns.

Question: From the vantage point of your current office, is there a particular message you want to share on this issue of gun violence?

Rev Karim Camara: Speaking as a pastor, every faith leader has a responsibility and a mandate according to the ethos of our respective religions to be involved in issues of social justice and to find a way to help the poor, find a way to engage someone who is currently disconnected from society to see that they can get an education, to see that they can get a job, to see that there are no permanent ramifications to their life of having a criminal record. The faith leader has to step up to the plate and be engaged in their respective communities. The faith community has the responsibility to help young men and women who are removed from the educational process, the employment process and to connect them. I would say to young people, don’t let a temporary problem be impacted by a permanent action. When you have a temporary problem and being disconnected from school or work, don’t allow that in your moment of despair lead you to do something like violence that will have a negative permanent impact on life, do something that will have a positive and lasting impact on your life, reach out to a local faith leader, a local church, a local mosque, a local synagogue because there are resources out there to help you. Whatever you are going through, believe in yourself, and maintain your hope, because in spite of the economic condition, in spite of the education you may have received, in spite of your social situation you are still a miracle, a person who can be a world changer if you just look long term and do the things you need to succeed and advance in your life.

Posted by Figeroux & Associates at 2:24 PM